Get fresh music recommendations delivered to your inbox every Friday.
We've updated our Terms of Use. You can review the changes here.

Ruth Draper and Her Company of Characters: Selected Monologues 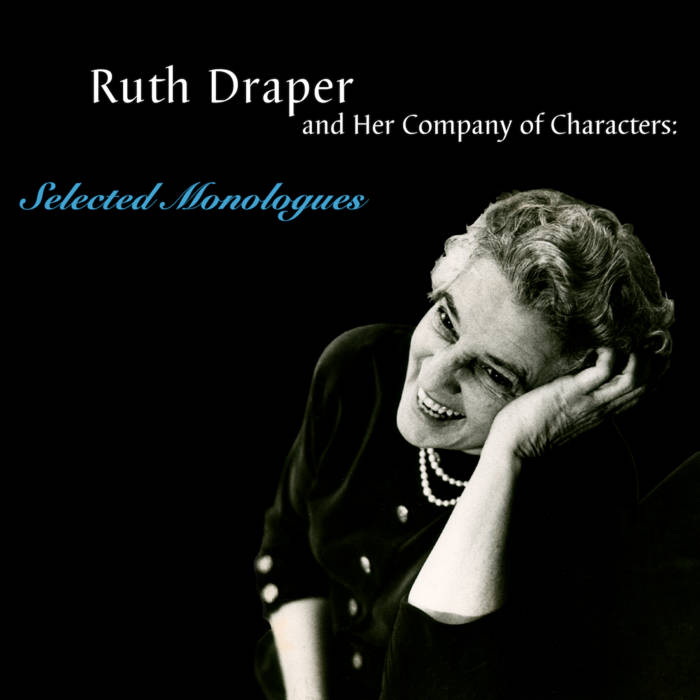 Seven of the master's greatest monologues, including "The Italian Lesson" and "Doctors and Diets."

Though the technology existed to record Ruth Draper's monologues in the 1920s and ’30s, at the height of her popularity, and she had had discussions with record companies, she did not begin to seriously investigate recording her work until the 1940s.

Certain that an audience contributed as much to an evening with Ruth Draper as she did, she always preferred that her work be experienced as live performance. She took cues from an audience's response, and each time she did a particular piece, it differed slightly from the time before; definitive versions of her monologues did not exist. The published version of 35 of her sketches, for example—which Doubleday released in 1960 as The Art of Ruth Draper—contains lines and even entire incidents that do not appear in the recorded versions, as do earlier written versions.

But in the years following World War II, as Draper entered her 60s, she became more interested in following up on earlier offers to preserve her monologues. Alexander Korda made a screen test of her, a copy of which still exists, though the sound has been lost. Films of Draper made around the same time by British director Hugh Beaumont have disappeared. In the 1950s, she made three U.S. television appearances. No copy exists of her 1954 appearance on The Ed Sullivan Show, but a kinescope of her 1956 performance of "A Children's Party in Philadelphia" on Omnibus, the acclaimed magazine program of television's early age, is housed at the Library of Congress. And a copy of Draper’s performance of “The Scottish Immigrant” on The A.N.T.A. Album of 1955, a fundraising special that was broadcast live to movie theaters around the country, is preserved in the UCLA Film and Television Archive.

Draper had conversations with Decca in England in 1950, but the company ultimately decided not to go ahead with recording audio of Draper's sketches. Not long after that, she began working with His Master's Voice, the British wing of the Victor company, which for years had tried to entice her into the studio.

As Draper approached her 70th birthday, Charles Bowden and Richard Barr, who produced Draper's theatrical engagements during the final years of her career, set up sessions with RCA in New York. Richard Mohr, an engineer who had worked on recordings with Arturo Toscanini, supervised the process.

The first sessions took place in 1954, as Draper completed her "farewell" season at Broadway's Vanderbilt Theater. It turned out to be a Frank Sinatra-like departure, and Draper was back on Broadway late that year, this time with her nephew, the tap dancer Paul Draper, for a run that extended into 1955. (She appeared again in 1956, a season that was truly her last; Draper died at home in bed after a Saturday night performance at the Playhouse Theater in New York on December 30, 1956.) Additional sessions took place in 1955 at RCA's Studio 1 on W. 24th Street. Draper traveled a good deal, but was based in New York, where she owned on apartment on E. 79th Street. The sessions were scheduled when Draper knew she would be in New York and would have time for them. She also scheduled some sessions in early 1956.

Though some accounts of the sessions have Draper so nervous about the process that the mike was turned on without her knowledge, when she thought she was rehearsing, the recorded "bloopers" belie that notion. She interrupted takes numerous times to ask if they were alright, or to declare them inadequate and suggest they start again. She knew exactly what was going on.

RCA's Red Seal label released only a single album. It contained "The Italian Lesson," "Three Generations in a Court of Domestic Relations" and "A Scottish Immigrant at Ellis Island." With the exception of a private pressing of several albums made mostly for Draper's family after her death, no other recordings were available until several years later when Spoken Arts, a company founded by Arthur and Luce Klein that specialized in literary and theatrical spoken word, released five albums containing eleven of the monologues. Spoken Arts later released cassette versions of the same sketches. Spoken Arts was taken over by new owners in the late 1980s, however, and the company's focus shifted to educational material. Under its new owners Spoken Arts continued for several years to carry the Draper cassettes, but in early 1999 the company eliminated entirely its catalog of literary and theatrical spoken word.

While researching an article about Ruth Draper that appeared in the November 1999 issue of Vanity Fair, I learned that the recordings had gone out of print. After trying unsuccessfully to find another spoken word label to pick up the recordings, I decided to produce CD versions myself. Ruth Draper and Her Company of Characters: Selected Monologues was released in 2000, and More Selected Monologues, my second CD compilation of Draper's recordings, first became available in 2001.

Ruth Draper was the undisputed queen of the one-woman theater in the 20th century. Throughout nearly forty years as a professional performer, Draper filled theaters all over the world through her unique ability to transform herself into a vast array of characters. Draper composed more than fifty monologues over the course of her career, seventeen of which are available here. ... more

Bandcamp Daily  your guide to the world of Bandcamp

Trevor de Brauw of RLYR and Pelican stops by for a chat, plus a tribute to the late Trevor Strnad